Jennifer Saibil
(TMFanibird)
Author Bio
Jennifer grew up in New York and spent a lot time shopping, which really helps her write about retail. Prior to joining The Fool as a contract writer, Jennifer had traded her finance degree for diapers and tantrums. When she isn’t writing, she can be found reading while she avoids housework.

Starbucks (NASDAQ:SBUX) announced higher-than-expected fourth-quarter earnings last week, bolstered by increased sales of iced coffee and cold brews as well as increased revenue from sales in China. While the word on the street is the China factor was the significant data point to notice, the cold coffee sales are an important signal about what Starbucks is all about and why it's a coffee -- and stock market -- megastar.

From the time former CEO Howard Schultz joined the company in 1982, the focus at Starbucks has been on creating community along with generating profit. This forward-thinking attitude, especially during those early years, has brought Starbucks tremendous success. It sees coffee as more than a bean or a drink, and it's been able to leverage that je ne sais quoi into a thriving, 22,000-plus-store enterprise valued at roughly $98 billion. 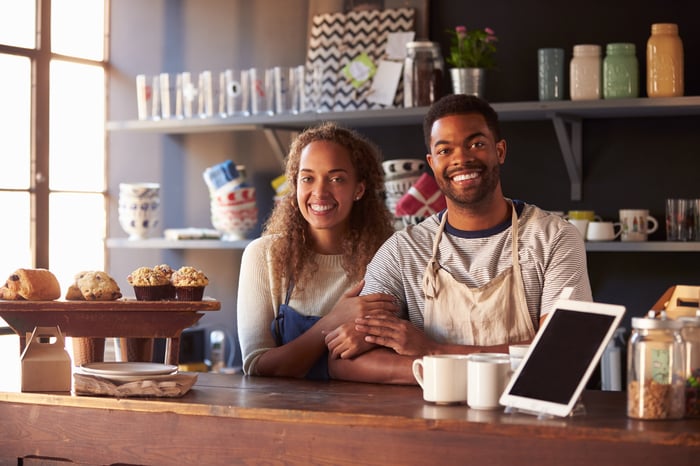 The company has invested in its employees, offering attractive healthcare plans and stock option programs for even part-time workers, and has presented itself as a model of environmental responsibility and community building. It also offers a strong dividend for shareholders.

After a bumpy 2018, fiscal year 2019 earnings per share rose to $2.83, a 17% increase from the year before. That happy report needs to be somewhat tempered by the knowledge that a public relations fiasco contributed to an unexpected pullback in 2018, making for perhaps an artificially low EPS, but regardless, it's another step in the right direction for the global coffee leader.

One of the main factors in the rise was the cold offerings. Pat Griismer, Starbucks CFO, said "The
majority of the beverage growth was driven by our cold platform, which grew across all dayparts, led by cold coffee, refreshment, and tea."

An exceptional ability to hone in on its market

In an interview with CNBC, current CEO Kevin Johnson talked about the company's strategy, "focusing on the right things, and then executing with discipline," including "driving beverage innovation." He mentioned several cold brews and iced drinks that have been successful recently with customers. While iced coffee spurring revenue itself may not be big news, it's an effective demonstration of the company's goal and skill in focusing on the right things and then making them happen.

Of course, there isn't really any je ne sais quoi in coffee marketing, and Starbucks makes the effort to figure out and provide what its customers want. Johnson told The Wall Street Journal in an interview that he relies on data and analytics as well as experiential learning to get an authentic view of what's happening on the ground. He noted that younger customers are drinking more cold drinks throughout the day, and Starbucks has increased its cold brew offerings to meet that demand.

For the fall season, the company introduced a pumpkin-flavored iced latte, and it's bringing out special seasonal flavors such as peppermint mocha, caramel brulee latte, and eggnog latte, available hot, iced, and as a blended Frappuccino for the upcoming holiday season.

Cold beverages currently account for about half of total sales for Starbucks, but that's in flux even as it's growing, with Frappuccino sales sagging. The company has introduced a cold "nitro brew" on tap in all of its stores to appeal to millennial cold brew drinkers.

One of the many things Starbucks does well is move forward. After the Philadelphia PR disaster last year, Johnson closed its more than 8,000 stores for a day of "racial bias education training" and moved the company right along.

Starbucks made significant changes to its rewards program last year for the third time since its creation in 2009 to create a tiered system that allows customers at all levels to redeem rewards for different degrees of loyalty.

The company has recently partnered with Uber's Uber Eats in the U.S. and Alibaba in China to offer delivery, and it's opening its first mobile store in New York City, where most customers order and pay through an app and just pick up.

Starbucks is already rolling out several new cold drinks to keep that momentum going, looking to soak up the demand and further increase revenue. And yes, China, with strong sales in that market, is a significant factor, too.