Domino's (NYSE:DPZ) investors could be in for some big surprises in a few days. The pizza delivery leader is set to report its earnings results for the period that included maximum social-distancing efforts in the core U.S. market. And while that fact makes it likely that sales growth will soar, a lot of that optimism is already baked into its stock price, which has surged in 2020. Domino's also might have some less exciting news for shareholders hoping to see a clear path toward robust growth into 2021.

Let's take a closer look at the report set for Thursday, July 16. 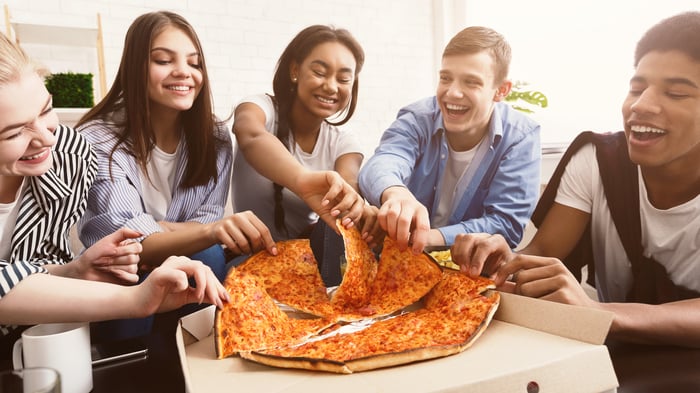 It's no secret that Domino's business has seen a lift from the COVID-19 pandemic and related restaurant closures. Sales gains in the U.S. were 1.6% in the fiscal first quarter, which ended on March 22, but then shot up to 7% in the following four weeks as the chain became a go-to choice for consumers whose dining options had shrunk.

The big question is where demand settled over the next few months, and there's a wide range of possibilities on this score. Shopper behavior moved radically with every passing week during the sales months of March, April, and May. Domino's noted a bigger growth spike through early May as comparable-store sales gains jumped to over 20%. Investors will find out on Thursday whether that shift held through the end of the quarter in mid-June.

As much as investors like to see a sales growth spike, the more important trend to watch is around market share. Domino's revealed some potential warning signs in this area before the pandemic hit, in part because fast-food chains and third-party aggregators were rushing into the home delivery space. Its sub-2% growth rate in the first quarter marked the seventh time in eight quarters that sales growth slowed, in fact. A major question going forward is whether that story has changed.

The bullish investment thesis for the stock depends on Domino's fending off these delivery challengers -- and more traditional rivals like Papa John's -- using assets like its efficient selling model, its tech innovations, and its industry leadership position. Any comments that CEO Rich Alison and his team make about their market share will reflect that competitive posture.

The outlook for the second half of fiscal 2020 is cloudy, and so investors aren't likely to get a detailed forecast from management this week. But we know the period ahead includes major headwinds such as the reopening of Domino's restaurant competitors and a recessionary sales environment.

The pizza delivery leader is better positioned than its peers to survive any shake-out that is likely to rock the industry over the next year or so. But that doesn't mean management can't improve on its operating posture, including with moves like boosting marketing spending, reducing debt, and doing what it can to secure its dominant hold on the market. The surest path toward extended growth wins is for Domino's to keep widening the quality and value gap between itself and rivals, as it has for much of the past 15 years.