The CDC said the number of people living with diabetes has more than doubled over the past 20 years, so the market presents a huge opportunity for companies that concern themselves with treating the disease. The most common form of diabetes is type 2, which CDC research says occurs in 90%-95% of diabetes patients.

If you're looking to invest in companies treating diabetes, DexCom (NASDAQ:DXCM), Tandem Diabetes Care (NASDAQ:TNDM), and Novo Nordisk (NYSE:NVO) are worth looking at this month in the healthcare space. 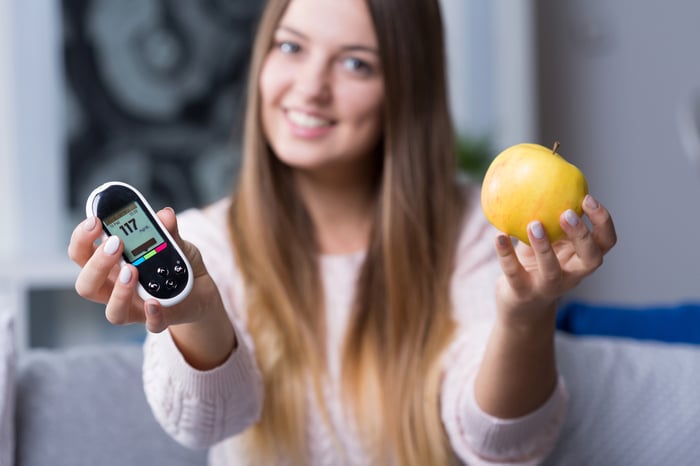 Until last week, I also would have included Livongo Health (NASDAQ:LVGO) on this list. As I said two months ago, the company's virtual-care monitoring system has fostered growth that should continue. However, it was announced Wednesday that Teladoc would acquire Livongo, which, in the short term at least, may actually depress Livongo's share prices. As of close Friday, Livongo had dropped more than 5% this week.

DexCom is having a great year despite the pandemic

Shares of DexCom, which makes continuous glucose monitoring (CGM) systems to help manage diabetes, are up 101% for the year, as of Friday. The company announced second-quarter results last week, and it was all green lights. Its reported revenue in the quarter was $451.8 million, a growth of 34% year over year.

The big number was that the company had $46.2 million in net income, compared to a $10.5 million loss the same quarter last year. Things are going so well that the company reinstated guidance for 2020 with a predicted $1.85 billion in yearly revenue, which represents a 25% improvement over 2019.

DexCom's CGM devices eliminate the need for constant finger pricking to measure one's glucose levels. They can easily be worn on the stomach, lower back, or upper arm (though the last method is not yet approved by the Food and Drug Administration) and give readouts on smartphones. Compared to finger sticks, DexCom's devices have an ease of wear and high tech that have helped bring in new patients, the company said. Where DexCom has really benefited is in the revenue related to its replaceable sensors that come with its CGM devices. While the hardware revenue was up 2% year over year and 38.5% compared to the same quarter in 2018, the sensor-related revenue was up 39.9% year over year and 103% over the same quarter two years ago.

A recent report on the insulin pump market predicts a 9.4% compound annual growth rate (CAGR) through 2026. Tandem is well placed to take advantage of that momentum because it has an easy-to-use pump that is gaining market share.

Fast-growing companies are a great way for investors to make money, and Tandem fits that bill. In the second quarter, the company's reported sales were $109.2 million, a 17% increase over the same quarter in 2019. The company said it shipped 14,735 pumps in the United States in the quarter, a 15% jump year over year and nearly as many as the 17,000 the company delivered in the entire year in 2017.

The market has taken notice. Its shares are up more than 80% year to date. While the company hasn't turned a profit yet, it lost $24.75 million last year, down from $122.61 million the year before, so it appears on its way. More importantly, it has been growing revenue, with a CAGR of 37.82% over the past five years.

Novo Nordisk has found itself a nice niche in diabetes care

Novo Nordisk, a pharmaceutical company based in Denmark, specializes in diabetes care, plus treating other chronic diseases such as obesity and rare blood and endocrine disorders. While the company has seen some headwinds because of the coronavirus pandemic, its diabetes business remains solid. The company's share prices are up more than 25% year to date.

The company has had three consecutive years of growth in revenue and net income. In its second-quarter report, announced Thursday, it said revenue was $4.77 million, largely flat year over year, while net income was $1.69 billion, an 11% rise over the same period in 2019, beating analysts' estimates.

Especially encouraging is the rise of the company's new type 2 diabetes drugs Ozempic and Rybelsus, both of which are forms of semaglutide, which the company says increases the body's own insulin production. Ozempic, a once-weekly injectable, brought in $1.65 billion globally last year compared to $264 million in 2018, the year it was introduced in the United States. In the first half of the year, it brought in $1.05 billion, a 156% rise over what it did in the same period last year.

The company really sees big things for Rybelsus, a once-daily pill, which has brought in $64.5 million in revenue so far in the first six months since it was launched. Rybelsus was approved by the FDA last fall. Like Ozempic, it's used to lower glucose levels and has additional cardiovascular benefits. 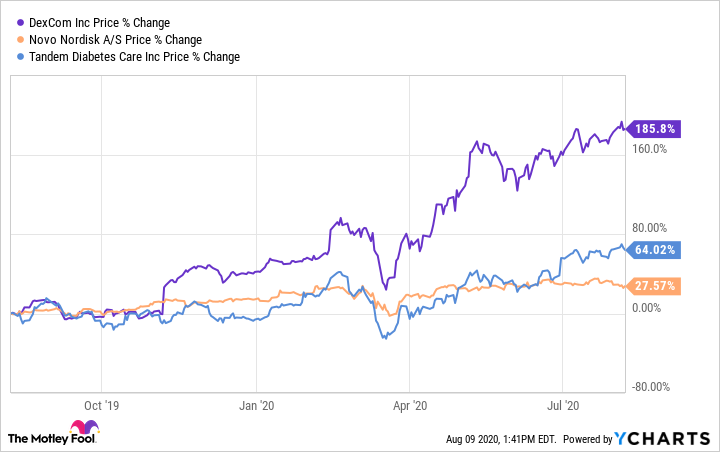 Investing in a growing field of care

All three companies present themselves as good opportunities for investment this month. I especially like DexCom because diabetes is a difficult disease to manage, and the company's CGM device makes things easier for patients and gives doctors more information. Tandem has a similar edge because its pump is gaining ground on competitors. Novo Nordisk, however, may be the best long-term option because it is working on drugs to not only manage diabetes but, in some cases, prevent it.