Underperformance has been the watchword for AT&T (NYSE:T) for way too long now. Over the last 25 years, the price of the telecom stock has risen by only 25%. During the same period, the S&P 500 climbed in value by almost 540%. Although the popularity of 5G networks offers the potential for AT&T stock to resume growth, the stock price stagnation for this company will likely continue for the foreseeable future for three reasons.

1. AT&T puts too much focus on non-core assets

AT&T has invested heavily in non-wireless assets. For one, it spent $67 billion (including the assumption of $18.5 billion in debt) for cable-TV alternative DirecTV in 2015. In 2016, it spent $85 billion for what is now WarnerMedia. Among other things, the WarnerMedia purchase led to the company creating HBO Max, which increased its subscriber base by 2.7 million in the last quarter alone. Still, the $14.99 per month fee it gets from HBO Max subscribers does not make up for the minimum cost of $64.99 per month that a dwindling number of DirecTV subscribers pay. 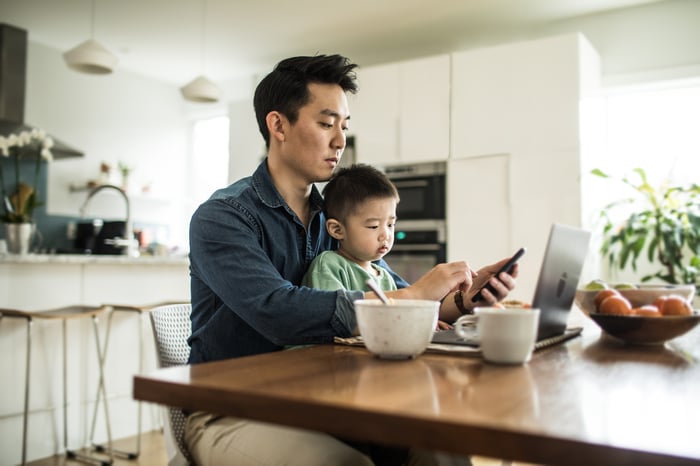 However, DirecTV's shrinking subscriber revenue is the least of its problems. DirecTV has haunted AT&T since its 2015 purchase. The rise of streaming led to massive cord-cutting and a significant devaluation of the asset. Despite this challenge, AT&T has refused to fully divest this losing holding. Though it technically spun off DirecTV, it chose to hold a 70% stake in this new company. AT&T now values the spinoff that includes DirecTV at just over $16 billion and is rumored to be trying to sell off its remaining stake.

When comparing troubled telecom expansion efforts that don't focus on 5G, the roughly $9 billion that Verizon (NYSE:VZ) (unwisely) spent on AOL and Yahoo! represent a comparatively minor problematic investment. Moreover, T-Mobile (NASDAQ:TMUS) has focused exclusively on wireless and 5G expansion. Its purchase of Sprint in 2020 significantly added to its debt, but at least it was focused on telecom expansion.

2. The cost of the dividend is weighing on AT&T

Dividend costs also hamper AT&T. In the most recent quarter, the quarterly free cash flow of almost $5.9 billion adequately covered the dividend cost of just over $3.7 billion. This amounts to 63% of free cash flow. Still, Verizon only pays out about 50% of its free cash flow in dividends, while T-Mobile does not offer a dividend payout. This growing obligation places AT&T at an (admittedly small) competitive disadvantage.

Additionally, its payout has risen for 35 consecutive years, making AT&T a Dividend Aristocrat. Its shareholders now earn $2.08 per share, a yield of about 6.6%. This is almost five times higher than the S&P 500's average yield of 1.4%.

However, the dividend creates a Catch-22 dilemma for AT&T. Being a Dividend Aristocrat helps stabilize the stock price as it is an enticement for funds and investors accustomed to annual payout hikes. But at its current yield, a payout hike would not appear necessary to keep enticing investors except it's what is needed to maintain the Dividend Aristocrat status. Moreover, stocks that have surrendered the status have often suffered for years amid sell-offs.

AT&T has not hiked the payout so far this year, and it will lose the Aristocrat status if the payout does not rise sometime in 2021. While AT&T will probably increase the dividend by the end of the year, this delay has created more uncertainty for AT&T's stock price.

The dividend costs also leave AT&T with less available capital to upgrade its network. In 2020, AT&T spent just under $15.7 billion in capital expenditures, most of which went to building its 5G network. This is down from the 2019 outlay of just over $19.6 billion. In comparison, Verizon spent $18.2 billion in 2020, while T-Mobile allocated $11 billion to property and equipment during that period.

For now, investors do not have to worry about network speeds. The Ookla Speedtest recently rated AT&T's network the fastest for both 4G and 5G. However, both its competitors have expressed an intention to upgrade speed and quality.

T-Mobile plans to intensify the competitive landscape. In a letter published last fall, T-Mobile CEO Mike Sievert stated that consumers would no longer have to choose between a "great value and a great network." Hence, the company intends to improve its network quality and compete for higher-paying business customers.

Moreover, Verizon spent $45 billion on spectrum in the government-led C-band auction early this year, nearly double the $23 billion AT&T allocated. The spectrum purchase has raised AT&T's total debt to $180.2 billion, and the overall obligation may have limited AT&T's ability to buy more of the much-needed spectrum. During the first-quarter 2021 earnings call, CFO Pascal Desroches said the company would focus on debt reduction. Nonetheless, this burden could hamper future investments.

Furthermore, AT&T has not outlined a more definitive network-as-a-service strategy. Such an opportunity provides a segue to further monetize its network and, by extension, stabilize its balance sheet. In contrast, Verizon has built partnerships with Amazon's AWS and Honda's autonomous driving, and others. AT&T will probably need to follow suit to remain competitive and better monetize its network.

Where this leaves AT&T

For now, AT&T remains competitive in the telecom space. As long as the company can produce sufficient cash flows, it should maintain Dividend Aristocrat status and keep its debt from overwhelming the company.

However, the current trajectory leaves the company with a strained balance sheet and negligible growth. Until AT&T can figure out how to boost revenue and earnings, it may continue to struggle to broaden its stock's appeal beyond some risk-tolerant dividend investors.