Jennifer Saibil
(TMFanibird)
Author Bio
Jennifer grew up in New York and parlayed her finance and public administration degrees into helping good causes with non-profit work. She has now turned her focus to helping investors lead happier and richer lives at The Motley Fool.

Life was good for Amazon (NASDAQ:AMZN) in 2020. The retail king pulled out all the stops to keep up with digital demand, and sales soared. Now that those days have passed, and growth has decelerated. But life is still good if you own Amazon stock, because the company isn't slowing down at all. Here are three ways it's going to grow this year.

1. People are making the permanent switch to digital

Digital sales weren't only a pandemic thing. They're here to stay, and Amazon is the king of them all. That's evidenced by Amazon's continued growth in the face of huge sales increases last year. So while the company is expecting sales to grow 10% to 16% in the third quarter, that's on top of 37% last year, which is no small feat. In fact, it may outrank rival Walmart as the largest company in the U.S. very soon. 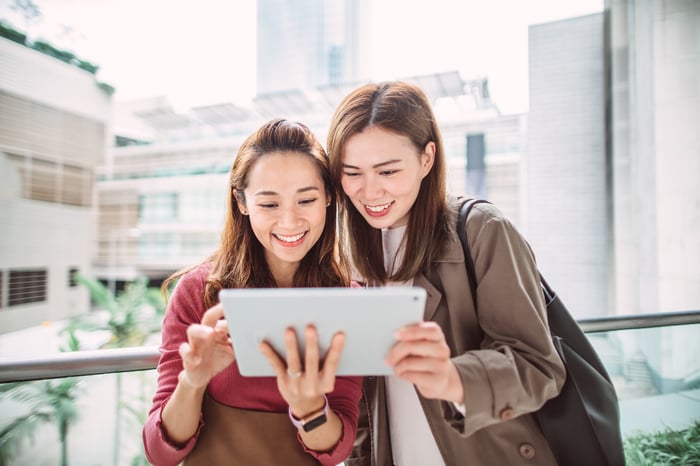 One area Amazon has been pushing into for years is grocery, and according to McKinsey, online grocery penetration in the U.S. grew from 4% in 2019 to between 10% and 15% in 2020.With more than $12 billion in free cash flow at the end of the second quarter, Amazon has the power to pursue this agenda, and it has done so relentlessly.

It's investing in many other areas as well, such as Amazon Pharmacy and Amazon Fashion. And let's not forget, Amazon typically beats sales guidance (although it came in right on schedule in Q2.)

2. At the same time, Amazon is making inroads into physical retail

Digital may be the new way to shop, but omnichannel shopping is best to way to capture more sales. Target, for example, had its best performance in years, powered by its broad range of shopping options that marry digital and physical. Drive-up was its fastest-growing segment, increasing 123% in the first quarter ended May 1.

As the economy reopens and people return to stores for some of their shopping, Amazon's retail takeover won't be complete without a strong physical presence. But being Amazon, its stores include digital solutions, such as its just-walkout technology. The company has several cashierless stores where customers sign up, put what they want in their carts, and automatically receive a bill. Amazon has 15 Fresh stores, and as of the end of the second quarter, its first full-size cashierless store.

Amazon operates about 80 physical stores in various formats with plans to open more.

3. AWS is signing up more clients

E-commerce may be slowing down after record growth during the pandemic, but Amazon has expanded into other businesses, notably, Amazon Web Services. AWS has been a huge growth driver since it debuted 15 years ago, and although it typically accounts for around 13% of sales, it contributes about half of income. In Q2, it added Swisscom, Switzerland's largest telecommunications company, and Canada's BMO Group to its growing roster of high-profile clients.

Along these lines, no one should underestimate what Amazon, led by new CEO Andy Jassy, could have up its sleeve. Some of its recent deals are the acquisition of Metro-Goldwyn-Mayer (MGM) Studios to beef up Amazon Prime Video, and a partnership with buy now, pay later provider Affirm Holdings. But the internet giant could easily come up with a surprise announcement that could shake up its business and create new growth streams.

Amazon stock is about flat year to date as of this writing, but investors should expect years of growth ahead.