Annual passes are returning to Walt Disney's (NYSE:DIS) most popular theme park resort on Wednesday, and it's a bigger deal than you probably think. Disney World's new year-round tiered admissions media come with hokey if not confusing branding and equally perplexing price points.

The new annuals are stripped of many features that used to be included in the previous theme park smorgasbord passes, and that obviously is a sticking point for regulars. However, the new passes -- that most diehard Disney World buffs are loathing right now -- are about to flip the script in a way that will makes shareholders rich, annual passholders relevant, and the overall experience more palatable to the resort's most lucrative visitors.

Did you come to this article expecting to be told everything that you didn't want to hear? If so, grab a seat. You've come to the right place. 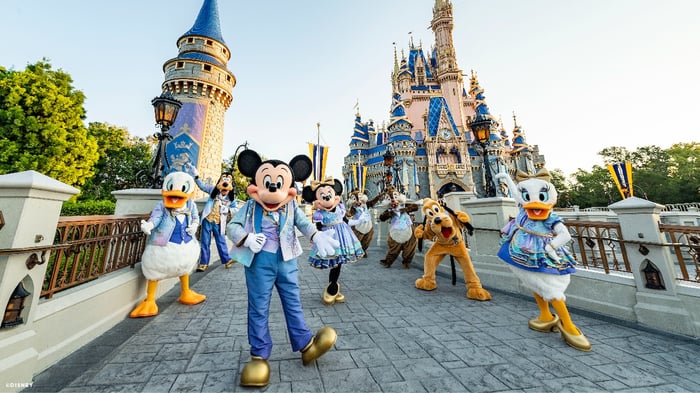 You thought you were special

Most annual passholders think that they're at the top of the food chain. They pay between $1 and $4 a day for passes with a year of access. The cheaper passes naturally have more block-out dates and restrictions, but it's still a key that magically unlocks the entrance turnstiles at the resort's four gated attractions for a year. They get complimentary parking, something that folks paying at least $109 for a one-day park ticket today -- or $142 for a one-day park hopper -- don't get.

Annual passholders also get discounts on food and merchandise that day guests aren't receiving. Before the pandemic, these year-round passes offered more. They allowed holders to square away advance access to expedited queues that used to be called FastPass, but are now being rechristened as Lightning Lanes that are accessible only to folks paying $15 a day for the Genie+ on the app. Access to some of the more popular attractions with the longest lines will cost even more.

The highest-priced annual passes also included access to digital photos taken throughout the resort and access to Disney World's water parks. Those experiences are now $99 add-ons for annual access.

It's pretty clear why annual passholders that will be paying more and getting less are upset, but it doesn't mean that the system wasn't broken before. There's an expression that started in the days of free network television but has become even more popular in describing free ad-supported websites.

Annual passholders are definitely paying for the product in this case, but they're shelling out three figures -- for all but the priciest of the four new tiers -- for a year of Disney World access. A guest staying on-site will easily spend four figures for just a few days.

Even someone who isn't staying at a Disney resort might be paying more than you think. A three-day park-hopper pass bought starting today tops $400, costing more than the lowest-priced annual pass. In the past your heart would have to go out for that off-site visitor, as by the time to pick advance FastPass return windows rolled around the annual passholders had already claimed many of the best attractions. The annual passholders are the ones who knew how to pound the app throughout the day to snap up any dropped FastPasses or dining reservations.

The new passes and the premium pricing for Genie+ are leveling the playing field. The day guest spending more per day than the more knowledgeable annual passholder getting the discounts and nailing the tricks to grab a Rise of the Resistance boarding group or a Chef Mickey's character dining reservation was being treated like the product instead of the customer. The tables are turning, and naturally one side doesn't like it.

Charging guests a premium for access to faster-moving lines will work the same way it does at Disney World's biggest rivals. Infrequent guests will pay up, because time is money and they want to experience as much as possible in a single trip. Annual passholders will shake their heads at the optional tollbooths, knowing that they can return when they know lines will be shorter.

It's perfect for Disney's bottom line. Premium-charged day guests are finally the customers with the ability to finally pay up for an advantage over the park pros. Annual passholders are the product. Their presence in the standby line will only make the Lightning Lane offering that much more compelling a purchase for the others. Disney isn't planting the flag on the controversial strategy, but it's going to turn heads because it's the top dog among travel and tourism stocks.

It's not what annual passholders want to hear, but it's also what makes them more valuable now than they've ever been before. They may think they're going from being the stars of the theme park shoot to the extras, but there's leverage in being the bodies in the background. Some of them will even pay up to roll with the top-paying customers, and Disney won't mind that one bit. Shareholders are going to love the new math, even as the hardcore fans threaten to pull out subtraction signs. It will all add up in the end.