Warehouse club giant Costco Wholesale (NASDAQ:COST) is set to report fourth-quarter and fiscal 2021 yearly earnings on Sept. 23. The company is continuing the momentum that began at the pandemic's onset, growing year-over-year sales. That's despite tough comparisons from the year prior when consumers had fewer options for where they could spend their time and money.

Costco's philosophy of delivering exceptional value to customers is attracting new customers and keeping existing ones. That being said, Costco's strong operating performance and prospects are getting noticed. The stock price is up over 22% in 2021.

Let's look at why the market is adding Costco to its shopping cart and if you should buy the stock ahead of earnings. 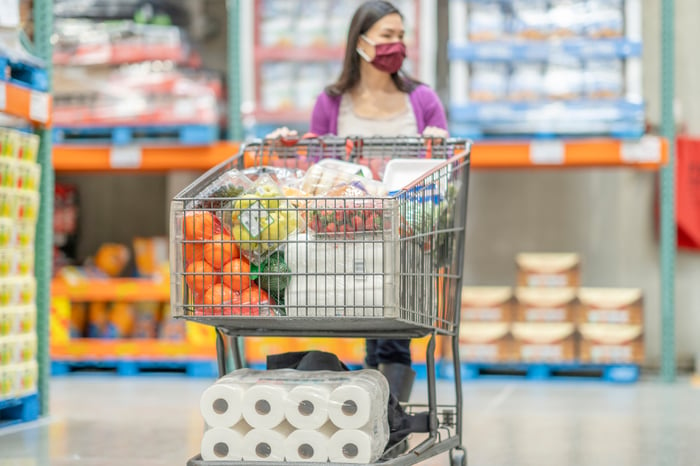 Although the stock has more than rebounded, it did experience a pronounced drop from Thanksgiving 2020 to early March 2021, just as the economy showed solid signs of reopening and vaccines for the coronavirus were approved. Some investors worried that consumers who relied on Costco during the pandemic might finally have other options for their spending money. But that hasn't really been the case so far. While sales growth did decelerate from the surging levels during lockdowns, the growth rate is still above pre-pandemic rates.

This can be attributed, in part, to Costco's management's skill at acquiring merchandise consumers want. Supply chain bottlenecks are causing shortages and increasing prices at many competing retailers. But Costco is bucking the trend with its seemingly always-stocked shelves and comparatively better prices.

Costco requires a membership to shop at its warehouse stores and it managed to add 4.8 million members to its now total of 60.6 million in the last year. Members pay a fee of either $60 or $120 annually for the basic or executive membership, respectively. The value it provides to those households is demonstrated by the 91% membership renewal rate it maintains in North America. Unlike other businesses that experienced surging revenue at the pandemic's onset, Costco is likely to retain a large part of the customers it attracted for several years.

The one caveat with Costco as a business is that it operates on skinny profit margins. Costco's operating profit margin averaged 3.1% in the last decade. That's a spread that leaves little room for error. Admittedly, Costco has not needed any room for error, given its excellent execution. The margin has been enough to grow earnings per share at a compounded annual growth rate of 11.9%.

Analysts on Wall Street expect Costco to report revenue of $61.2 billion and earnings per share of $3.53 in the fourth quarter. If the company reports revenue as estimated, which is likely, considering Costco provides monthly sales reports, it would be a 14.7% increase from the year prior. The earnings per share figure would be 16% higher.

The rise in Costco's stock price has it trading at a price-to-earnings ratio of 43.74, the highest it has traded for in almost 20 years. The relatively high price means potential investors don't need to rush out and buy the stock ahead of earnings. You have the luxury of waiting for results to come out, digesting the new information, and deciding after evaluation.