The NFL kicked off the regular season on Thursday night with the Super Bowl champion Tampa Bay Buccaneers outlasting the Dallas Cowboys, but fuboTV (NYSE:FUBO) has been scoring touchdowns all month long.

The sports-centric live-TV streaming service began the month by taking a pair of sticky platform features out of beta last week, giving its fast-growing subscriber base access to on-screen stats and predictive free-to-play games with cash prizes. This week it's striking a deal to expand its regional sports programming as well as a multi-year partnership with an NFL team to promote its upcoming sportsbook.

fuboTV is making the most of its meteoric growth by expanding its reach in more ways than one. To keep the earlier football metaphor going, fuboTV is running with the ball in its hands and it's making sure it doesn't fumble on the way to the end zone. 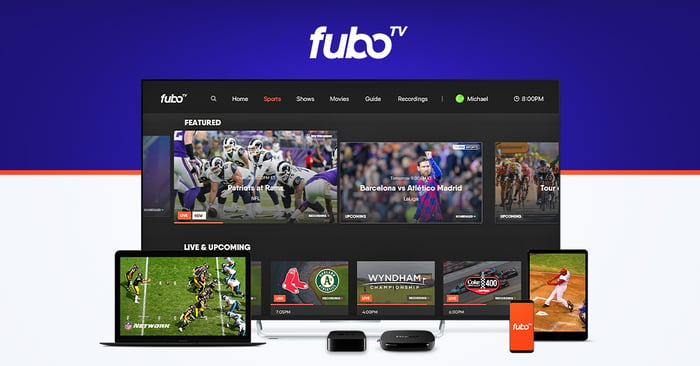 This week's news started on Wednesday when the New York Jets announced a partnership with Fubo Sportsbook, the online wagering experience that is expected to launch before the end of this year. The live-TV streamer will open Fubo Sportsbook Lounge at MetLife Stadium for Jets home games, a 7,000-square-foot lounge where adults will be able to watch NFL games within a casino-style sportsbook with betting odds integration. The lounge will have an outdoor patio to watch the Jets in action.

Fubo Sportsbook is also being tapped as an official sports betting partner of the club in the multi-year partnership. It's amazing how quickly the NFL has embraced the wagering that its biggest fans were doing already.

On Thursday the big news was a deal with ROOT SPORTS to make Seattle Mariners, Seattle Kraken, and Portland Trail Blazers regional game telecasts available on fuboTV. Regional sports networks -- or RSNs -- have been the bane of existence for live-TV streaming services. Most of the leading live-TV streaming services have cut ties with RSNs over the past two years, making it harder for diehard sports fans to cut the cord from their cable and satellite television providers if they want to keep watching local pro teams.

The pain is real. Living in South Florida, if I want to watch more than just the handful of nationally televised Miami Heat games my choices currently boil down to cable TV or signing up with AT&T's frustrating live TV streaming service. AT&T TV is currently the only streaming platform offering the Bally Sports regional network, and its interface leaves a lot to be desired in addition to lacking some of the features that are standard with some of its larger rivals.

If fuboTV will keep inking new RSN deals beyond ROOT SPORTS it will quickly live up to its "sports-first" programming mindset. Growth is already explosive at fuboTV. Revenue has skyrocketed 196% over the past year. If it will earmark more of its increasing rates to gobble up the leading RSNs it will make it hard for any sports fan to go with any other live-TV streaming service.

Once Fubo Sportsbook launches in the states where it clears regulatory hurdles it will make the platform that much stickier. Last week's launch of FanView real-time stats as well as the free-to-play games where viewers can predict in-game events to win prizes are differentiators that will make fuboTV gobble up market share in this niche at an even faster pace.

The fast-growing media stock has already nearly tripled since going public last October. We're now kicking off a new NFL season, and fuboTV apparently has a deeper playbook to make sure it keeps winning.