AT&T (NYSE:T) has streamlined its business through two bold moves this year. It spun off DirecTV, AT&T TV, and U-verse into a new stand-alone company in August. AT&T retained a 70% stake in the "new" DirecTV, while the private investment firm TPG bought the remaining 30%. 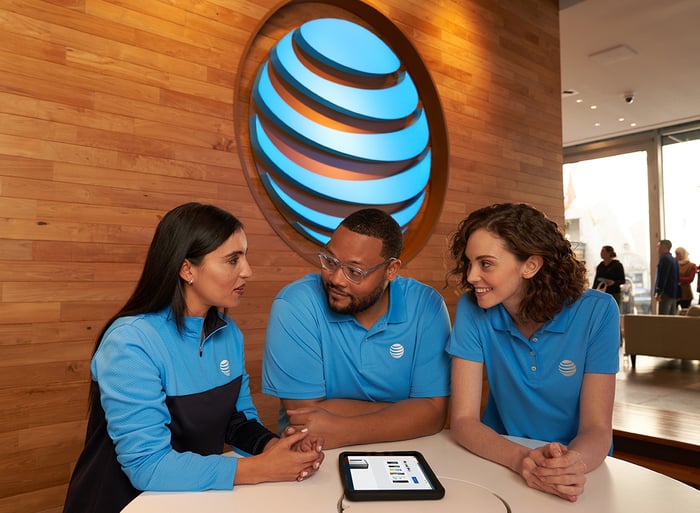 Unfortunately, AT&T's turnaround plans didn't draw many bulls back to the stock, which has declined 5% this year and stumbled more than 30% over the past five years.

However, AT&T's CFO Pascal Desroches recently provided an updated outlook for the company's divestments of DirecTV and WarnerMedia at a Bank of America conference. Let's review Desroches' latest comments, whether or not they change anything -- and if the two divestments make AT&T a worthy buy.

What did AT&T talk about?

After the WarnerMedia spin-off closes, Desroches believes the "new" AT&T will grow its annual revenue at a low-single-digit compound annual growth rate (CAGR) from 2022 to 2024 as its adjusted EBITDA and adjusted EPS increase at mid-single-digit rates. That guidance was unchanged from its original forecast in May.

Desroches also said the new AT&T would pay an annual dividend payout ratio of 40% to 43% from a projected free cash flow of at least $20 billion in 2023. That's also identical to its previous guidance, and implies AT&T's current forward yield of 7.6% will be reduced to about 5.5%.

As for potential regulatory challenges for its WarnerMedia spin-off, Desroches said there was "no reason" why the deal would be blocked.

Desroches also reiterated AT&T's goal of reducing its net-debt-to-adjusted-EBITDA ratio from a "peak" of 3.1 in the first quarter of 2021 to 2.5 or less by the end of 2023. AT&T will likely transfer some of its long-term debt to the new WarnerMedia spin-off to hit that target.

Does AT&T's update change anything?

AT&T didn't really offer any meaningful new numbers with its latest update, but it indicates it's still on track to complete the WarnerMedia spin-off next year.

AT&T believes the divestment will enable its core business to focus more on expanding its 5G networks and compete more effectively against T-Mobile (NASDAQ:TMUS), which surpassed AT&T as the second-largest wireless carrier in the U.S. after it merged with Sprint last year.

Streamlining this core business, expanding its 5G reach, and fully subsidizing Apple's new iPhone 13 could attract more subscribers and widen the company's moat against T-Mobile and Verizon. AT&T also expects to double the size of its fiber footprint to about 30 million customer locations by the end of 2025.

As for WarnerMedia, merging with Discovery should create a new media juggernaut that can compete more effectively against Disney (NYSE:DIS) and Netflix (NASDAQ:NFLX) in the streaming race. The new company could eliminate its dividend, allocate that cash toward new shows and movies, and generate much stronger growth than the "old" AT&T.

AT&T expects HBO and HBO Max to reach up to 73 million global subscribers by the end of 2021. The spin-off could accelerate HBO's expansion into additional markets to keep pace with Disney and Netflix, which hosted 174 million and 209 million streaming subscribers, respectively, in their latest quarters.

Is AT&T's stock worth buying?

I've owned AT&T for several years, and it's been a disappointing investment. However, the stock is undeniably cheap at less than nine times forward earnings, and it pays a high dividend. I'm willing to wait for the divestments and spin-offs to close to see if AT&T can keep its promises.

However, I don't think AT&T is a worthwhile investment for new investors, who can get better growth with T-Mobile or more stable returns with Verizon. AT&T is trying to reverse more than six years of mistakes under its new CEO, but it's still unclear if it's just moving the same old parts around or actually setting up the foundations for long-term growth.