Please ensure Javascript is enabled for purposes of website accessibility
Free Article Join Over 1 Million Premium Members And Get More In-Depth Stock Guidance and Research
By Will Healy - Oct 16, 2021 at 10:45AM

These companies have positioned themselves to provide a generous and rising income stream.

In a world where bank accounts pay low interest rates, dividend-paying stocks become a more appealing avenue for retiree income. Admittedly, the average cash yield for dividend stocks in the S&P 500 is only 1.3%, and companies can theoretically end payouts anytime. Such conditions may not appeal to income investors when advisors like Charles Schwab believe retirees should save enough to withdraw 4% of their account value per year in retirement.

However, some dividend stocks offer investors the confidence they seek because of a company's long track record of regular payouts. Three examples which fit that bill are AbbVie ( ABBV 0.13% ), STORE Capital ( STOR 1.00% ), and Verizon Communications ( VZ -0.55% ) -- and they also pay rising dividends that even exceed Schwab's 4% recommended return. 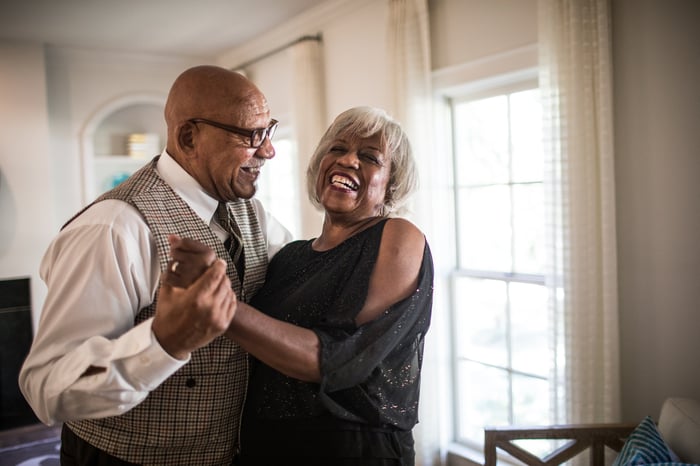 Drugmaker AbbVie offers its investors an annual payout of $5.20 per share. At its current stock price, that amounts to a dividend yield of about 4.8%. And thanks to its history as a part of Abbott Laboratories, the company holds Dividend Aristocrat status (for companies that have increased their dividend annually for at least 25 years).

Nonetheless, its longtime blockbuster drug Humira faces patent expirations across the world. While AbbVie has built a substantial development pipeline, its second-best-selling drug, Imbruvica, only drove $2.6 billion in sales in the first six months of 2021, well below Humira's revenue of $9.9 billion.

Still, some of Humira's U.S. patents will remain in place until the 2030s, giving AbbVie more time to develop alternative revenue sources. And the company generated $9.4 billion in free cash flow in the first six months of the year, positioning it to easily cover the $4.6 billion in dividend costs for that period.

Investors have taken notice as the stock has risen 26% over the past 12 months. Also, its price-to-earnings ratio (P/E) has climbed to 30 from 19 a year ago. AbbVie offers a burgeoning drug pipeline and billions in free cash flow, factors that should make it easier to fund a rising dividend for years to come.

Scottsdale, Arizona-based STORE Capital pays a dividend of $1.54 per year, providing a cash return of around 4.6% -- and this payout has increased every year since the company's 2014 IPO.

STORE's name stands for "single tenant operational real estate" -- and what it owns are single-tenant buildings that include grocery stores, health clubs, and distribution facilities. With these assets, it has maintained a 99.6% occupancy rate for the past five years, and it typically has raised rent by 1.9% per year as an inflation hedge. Such factors have helped make STORE a reliable dividend stock.

Investors should note that it is a real estate investment trust (REIT). In exchange for paying no taxes on its operational income, it must pay dividends amounting to no less than 90% of its net income. This REIT designation makes it highly unlikely the company would cancel its dividend, and the property portfolio should keep that payout rising.

Over the past six months, STORE reported $261 million in adjusted funds from operations (AFFO), a measure of free cash flow for REITs. This cash allowed the company to pay $195 million in dividends to shareholders.

STORE has had more going for it than just its payout. Its stock rose by 17% over the past year. Although its P/E of 38 may seem high, its peer Duke Realty offers a comparable multiple with a much lower return on the dividend. That track record, along with STORE's ability to hold tenants at increasing rents, should help maintain a generous, growing cash return.

Telecommunications giant Verizon just increased its dividend for the 15th consecutive year. Now with a $2.56 per share annual payout, investors can earn a 4.9% yield on its shares.

Although it operates in a competitive industry, Verizon is nevertheless only one of three nationwide 5G providers. With approximately $18 billion per year in capital expenditures in the previous two years, such expenses make the industry cost-prohibitive for new entrants, lessening the likelihood of additional competition.

Moreover, this spending has helped make Verizon the most-awarded company for network quality by J.D. Power 27 consecutive times. Further, on its most recent conference call, Verizon discussed the burgeoning network-as-a-service (NaaS), a data subscription business that can connect various devices and artificial-intelligence powered applications. Investors should take note because NaaS appears poised to give Verizon an additional revenue stream that did not exist before.

Verizon's focus on quality and innovation has allowed it to generate $11.7 billion in free cash flow (after capital expenditures) during the first half of 2021. With just $5.2 billion of that covering dividend costs, it should not face issues with future payout hikes.

Admittedly, the stock's 12% drop over the past year may deter some investors. Nonetheless, its 11 P/E ratio makes it an affordable choice for income investors who want rising cash returns and a new source of revenue helping to fund that payout well into the future.

Should You Buy This Blue Chip Biotech Stock?

What Investors Should Pay Attention to in AbbVie's Q3 Earnings Report