Buy low, sell high. You've no doubt heard that investing advice plenty of times. And it has worked well through the years in many cases.

However, there's another approach that also can be quite effective: Buy high, sell higher. Ideally, the sale will come after a long period of holding to enable really huge gains to be achieved.

Admittedly, it can be hard to buy stocks that seem overpriced. But there's often a good reason why investors are paying a premium. Here are three ridiculously expensive stocks that are still screaming buys. 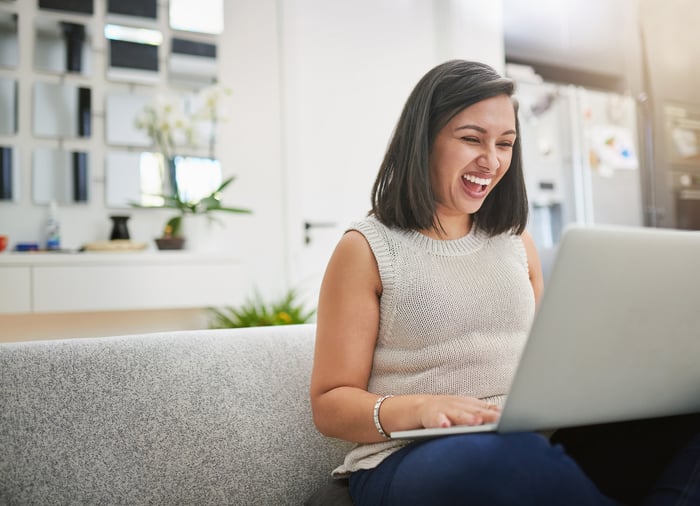 But Align's valuation isn't near its peak levels reached in previous years. More importantly, the company is only scratching the surface of its opportunity in the clear aligner market. Align currently has a market share of only 11%. Its market share for teens is even lower at 5%.

The company has a clear strategy to gain more of that addressable market. Align continues to aggressively market its Invisalign aligners with a primary focus to reach teens through digital media. It's also investing in development to expand the types of orthodontic cases where its clear aligners can be used.

Align's share price is close to 18% off its record high set a few weeks ago. The sell-off wasn't a result of any bad news, though. Look for Align's momentum to resume with positive Q3 results.

As is the case with Align, though, MercadoLibre's forward earnings multiple needs to be placed in context with its opportunity. E-commerce currently accounts for only 8% of total retail sales in Latin America. Morgan Stanley projects that percentage will double by 2025.

Over the longer term, MercadoLibre should have even stronger growth prospects. The e-commerce market penetration in Latin America could top 50% over the next few decades.

MercadoLibre isn't only focused on e-commerce, though. The company also has a booming digital payments business. It's also a leader in providing logistics services in Latin America. This top international stock is a great pick for long-term investors to buy right now.

You might want to sit down before learning how richly Fiverr International (NYSE:FVRR) is valued. The stock trades at a whopping 1,670 times expected earnings. But while Fiverr might seem absurdly overvalued, it really isn't.

Again, the reason why Fiverr's valuation is deceiving comes to down to the company's long-term growth prospects. Fiverr pegs its addressable market in serving U.S. freelancers at $115 billion per year. It currently only has a tiny fraction of that market.

But note the word "international" in Fiverr's corporate name. The company is headquartered in Israel. Fiverr is investing in international expansion, a strategy that should increase its total addressable market.

Workforce dynamics are also changing. Freelancing is gaining popularity with the growth of the "gig economy" accelerated by the COVID-19 pandemic. Fiverr's technology platform puts the company in a great position to profit from this trend. With a market cap of less than $7 billion, this stock truly appears to be a screaming buy.