The market sold off violently on Wednesday, Nov. 10 after the October consumer price index rose 6.2%, more than expected. In fact, it was the highest annualized inflation figure since December 1990. Core inflation, which strips out food and energy prices, rose 4.6%, the highest since 1991.

Inflation can be a two-edged sword. Some inflation is good, as it allows the economy to grow and for wages to rise over time. However, too much inflation too quickly can eat away at customer purchasing power and can lead to rising interest rates.

Many think current inflation is transitory, a symptom of the economy doing much better than expected as we emerge from the COVID-19 pandemic, and that it will slow down once bottlenecks are eased. However, others think prices may rise at a higher rate for longer.

To help your portfolio withstand the latter scenario, consider the following stocks, which were built not only to withstand high inflation, but even benefit from it. 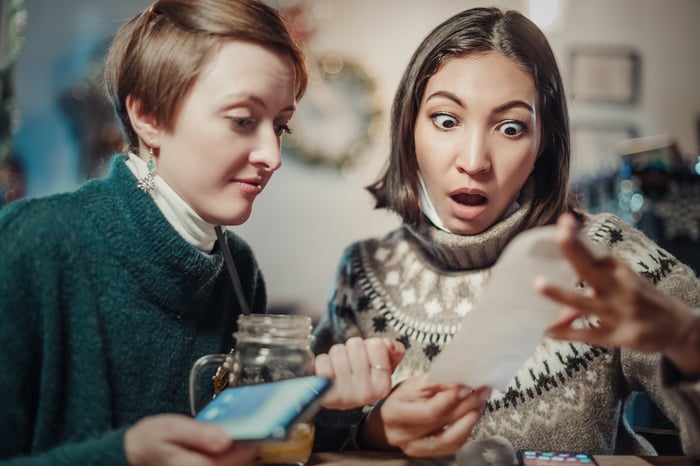 This Warren Buffett stock has an inflation-resistant business model

Credit card giant and Warren Buffett holding American Express (NYSE:AXP) rose on Wednesday as the market swooned, and it's not hard to understand why. The credit card company generally caters to well-off clientele, and its rewards programs have historically centered on travel, which many are doing right now as the pandemic recedes. The U.S. just eased international travel restrictions this week, which could spur more activity for AmEx.

That means if prices go up, American Express's discount revenue will largely go up proportionally. Moreover, its premium brand gives American Express pricing power. In fact, the company just raised the annual fee on its rewards-heavy platinum card by 25%, from $550 to $695.

An inflation-resistant business model, pricing power, and a reasonable valuation at 18.5 times earnings all make American Express a financial stock for the inflation-phobic today.

This Canadian gold miner is a low-cost pure play

One way investors have traditionally hedged inflation is through exposure to gold. Gold prices did get a bump on Wednesday, but are actually lower than they were to begin the year. Gold is generally seen as a hedge against sustained inflation, so while many are worried today about rising prices today, it appears the gold market has largely believed today's price pressures may indeed be "transitory" -- at least until now.

If you're worried inflation may be higher for longer, gold prices could rise, and low-cost gold miner B2Gold (NYSEMKT:BTG) would benefit. B2Gold has a few attractive characteristics. First, it only produces gold, whereas many miners often have a more diversified mix of metals. And while it's a "pure play," B2Gold does have diverse geographic exposure, with operating mines in Mali, Namibia, and the Philippines, development projects in Colombia and Burkina Faso, and exploration projects in Finland and Uzbekistan.

Another distinguishing characteristic of B2Gold is that it has some of the lowest all-in sustaining costs (ASIC) in the industry. Last year, ASIC was $788 per ounce, the lowest of any company outside Russia. Although management had forecast costs to rise this year to $890, third-quarter costs came in lower than that, at $795.

A low cost per ounce ensures industry-leading margins, but if gold prices end up soaring, profits will only increase. Meanwhile, B2Gold pays investors a 3.5% dividend, and its 10.7 P/E ratio makes it a value today, even with relatively flat gold prices year to date.

Prices at the pump were the biggest contribution to recent inflation numbers, and people are now worried about gas prices this winter, too. But rising oil and gas prices would benefit Devon Energy (NYSE:DVN), one of the lowest-cost shale producers in the U.S.

Devon acquired large shale peer WPX Energy in January, and operates mostly in the Permian Shale of Texas. However, about 30% of revenue comes from other basins across North Dakota, Wyoming, and Oklahoma. Production is evenly split between oil and natural gas.

Devon is currently gushing cash, as it benefits from both strong merger synergies as well as high oil and gas prices. Third-quarter free cash flow was $1.1 billion, eight times the amount it made the fourth quarter of 2020.

This year, Devon was among the first shale players to institute a variable dividend policy. Given soaring profits, Devon's recent quarterly dividend soared 71% over the second quarter to $0.84. That would annualize to an 8% yield at today's stock price. Not only that, but Devon is generating so much cash today that it has already lowered its debt to its long-term leverage targets, and thus authorized a $1 billion share repurchase program on top of its dividend.

Devon only trades at 8.5 times next year's earnings estimates, and that low multiple suggests investors don't believe cash flows will stay this high. But if you are worried about sustained high oil and gas prices, Devon would benefit handsomely from that scenario. Meanwhile, if prices fall, Devon's $30 West Texas International oil and $2.50 natural gas breakeven costs remain among the lowest in the U.S. That makes Devon a safe way to hedge against surging oil and gas prices today.