Biotech giant Biogen (NASDAQ:BIIB) shocked the investing world earlier this year when it earned regulatory approval for its Alzheimer's disease (AD) drug, Aduhelm. The nod came unexpectedly for at least two reasons. First, a panel of independent experts convened by the U.S. Food and Drug Administration (FDA) in November 2020 had strongly voted against approving the medicine, and the agency rarely goes against the wishes of these committees.

Second, Aduhelm works by reducing the buildup of a harmful protein called beta-amyloid. And while many experts believe the buildup of this protein in the brain is linked to the cognitive decline associated with AD, the science is still far from settled. Perhaps, as a result of these issues, the launch of Aduhelm has thus far been a bit of a letdown. And there are more issues for Biogen to consider. Other drugmakers are currently looking to develop better AD therapies.

One such company is Eli Lilly (NYSE:LLY), and it recently announced some exciting news on that front. Let's see what the pharma giant is up to, and what it could mean for investors. 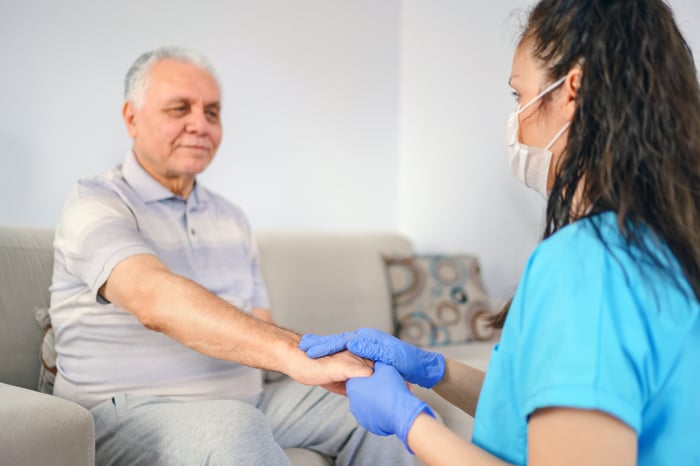 Eli Lilly speeds up the clock

Eli Lilly is pinning its hopes in the AD market on donanemab, a medicine that produced mixed results in a phase 2 clinical trial. Of note, donanemab also targets the buildup of beta-amyloid. In its latest quarterly update, Eli Lilly announced that it had initiated a rolling submission with the FDA for a Biologics License Application (BLA) for accelerated approval of donanemab in treating AD.

A rolling submission will allow the company to submit bits and pieces of the data to support the approval of donanemab instead of submitting it all at once. Eli Lilly said the submission should take a few months, and approval of the drug could come as early as the second half of 2022 if, of course, the FDA thinks the data supports the application.

Eli Lilly is also planning a phase 3 study for donanemab in which it will go head-to-head with Biogen's Aduhelm. The goal is to compare which is better at clearing up beta-amyloid plaques in the brain. Eli Lilly expects topline data for this study to come in by mid-2023, and it could help confirm the efficacy of the therapy.

Meanwhile, after the agency gave the green light to Aduhelm, it granted Biogen nine years to conduct a phase 4 post-approval study. If Aduhelm fails to prove effective in this study, the FDA could take it off the market.

Which is the better AD stock?

The best-case scenario for Eli Lilly would be for donanemab to earn approval next year and prove better than Aduhelm at clearing the built-up beta-amyloid plaques in the planned late-stage study. If that happens, Aduhelm will almost certainly lose significant market share. But that hasn't happened yet, and donanemab wouldn't be the first promising AD treatment to disappoint in a phase 3 study.

Biogen's Aduhelm is already approved, and although it isn't performing as well as expected, it is still bringing in money for the biotech. In the third quarter (ended Sept. 30), sales of Aduhelm came in at $300,000, far short of the $14 million analysts hoped to see.

Before crowning Eli Lilly as the next leader in the AD market, though, it'd be wise to wait for donanemab to earn regulatory approval. But does this mean Biogen is a better buy than Eli Lilly? No. In fact, the opposite happens to be true, in my view. Sales of some of Biogen's best-selling drugs had been declining before Aduhelm hit the market. The company's multiple sclerosis drug Tecfidera lost a patent lawsuit last year, and as a result, it is facing stiff competition from biosimilars.

During the third quarter, sales of Tecfidera came in at $498.6 million, representing a 47.7% year-over-year (YOY) decrease. The biotech's total revenue was $2.2 billion, down from the $2.7 billion it recorded in the prior-year quarter. Biogen's hopes to turn things around largely rest on Aduhelm, and given that it is underperforming so far, that doesn't bode well for the company's future.

By contrast, Eli Lilly's existing lineup continues to drive solid top-line growth. The company's revenue of $6.8 billion during the third quarter jumped by 18% YOY. With a rich portfolio of diabetes drugs, among others, Eli Lilly will continue to post solid financial results. Sales of Eli Lilly's top-selling product, diabetes medicine Trulicity, jumped by 45% YOY to $1.6 billion during the third quarter.

Further, the company boasts an exciting pipeline, too. Eli Lilly's potential weekly insulin product Basal Insulin-Fc (BIF) could be a big deal if approved. BIF is currently undergoing a phase 3 clinical trial. In short, Eli Lilly's future doesn't depend on donanemab, which, if it makes it to the market, would only bolster an already strong business. Meanwhile, Biogen's fate hinges on Aduhelm. That's why Eli Lilly is the better option of these two healthcare stocks.