Shares of Eli Lilly (NYSE:LLY) are up nearly 55% year to date, which raises the following questions: Have investors missed the boat on the stock? Or is now still a good time to buy?

Let's look at Eli Lilly's third-quarter operating results, which were reported on Oct. 26, its solvency, and the stock's current valuation to address these questions. 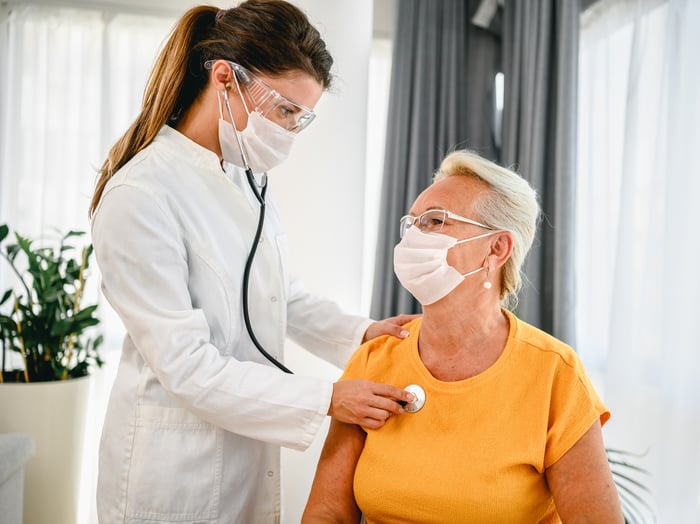 A great quarter in spite of varied results

Lilly recorded $6.8 billion in revenue during the third quarter, which works out to 18% year-over-year growth. This vigorous top-line growth exceeded even analysts' lofty expectations of $6.6 billion.

The company's rapid revenue growth over the past year was largely driven by two drugs. Its once-weekly type 2 diabetes medication, Trulicity, generated 47.8% of its revenue growth. This was the result of increased volumes and demand in the U.S. and throughout the world. Even Olumiant produced 6% of the third-quarter revenue, the rheumatoid arthritis drug owned with partner Incyte (NASDAQ:INCY), recently received expanded Emergency Use Authorization from the Food and Drug Administration to treat patients hospitalized with COVID-19.

Eli Lilly reported $1.94 in adjusted earnings per share (EPS) during the third quarter, which was 38% growth over the year-ago period. This was the result of both top-line growth and a 360-basis-point expansion in adjusted net margin from 22.5% to 26%. Despite this impressive growth, this fell short of analysts' forecasts for $1.98 in adjusted EPS during the third quarter. The drugmaker's performance through the first nine months of this year led it to raise its midpoint adjusted EPS guidance to $8 for the full year, which would represent 18% growth over last year.

A solvency ratio to help you sleep well at night

So Lilly appears poised to grow even more profitable this year than last. But another factor that should always be considered is whether the company is well enough financially to stay in business in the event that it encounters a temporary hit to its profitability. Eli Lilly passes this test with flying colors, but let's answer this by examining its interest coverage ratio, which is a way to quantify a company's ability to cover its interest costs using earnings before interest and taxes (EBIT).

Its interest coverage ratio through the first three quarters of this year was very high at 19 ($4.6 billion in EBIT against $240 million in interest expenses). Lilly's EBIT would need to plunge more than 90% for the company to be financially pressured, which is highly unlikely since this is a mature company with a strong portfolio of drugs. The other scenario that could cause a company to be unable to cover its debt obligations is a significant spike in interest rates. Fortunately, Eli Lilly is largely protected from this because only about 12% of its total long-term debt as of the third quarter was exposed to notes with floating or fluctuating interest rates.

Growth at an (almost) reasonable price

Eli Lilly appears to be heading in the right direction from a fundamental standpoint. However, the stock has made a major run from the mid-$220 range, when I last examined whether it was a buy, to more than $260 a share at present.

Based on the $8.23 in adjusted EPS that analysts are expecting over the next four quarters, Eli Lilly is trading at a forward price-to-earnings (P/E) ratio of 31.6. This is significantly higher than the 11.3 industry average for forward P/E. But Lilly's above-average balance sheet for its industry is one factor that justifies a higher valuation multiple. In addition, management's forecast for annual adjusted EPS growth of 14.8% over the next five years is only surpassed by 2 out of the other 19 selected companies in the general drug manufacturer industry. This further justifies an above-average valuation multiple.

Eli Lilly's forward price-to-earnings-growth (PEG) ratio of 2.1 isn't prohibitively expensive, but I generally prefer a PEG below 2 to build in an adequate margin of safety in the event of a market correction. That's why I believe investors interested in Eli Lilly should consider nibbling in the high $250 range, but ultimately wait for a pullback to around $240 a share before backing up the truck.