Capital One Financial (NYSE:COF) stock has returned more than 56% this year, which outpaces the S&P 500 as well as the financial sector. Yet, when you look at its valuation, it remains undervalued with strong growth prospects ahead.

While many investors have jumped aboard, many others have missed the boat on this still relatively cheap stock. Let's take a look at why Capital One is a good buy right now at its present valuation. 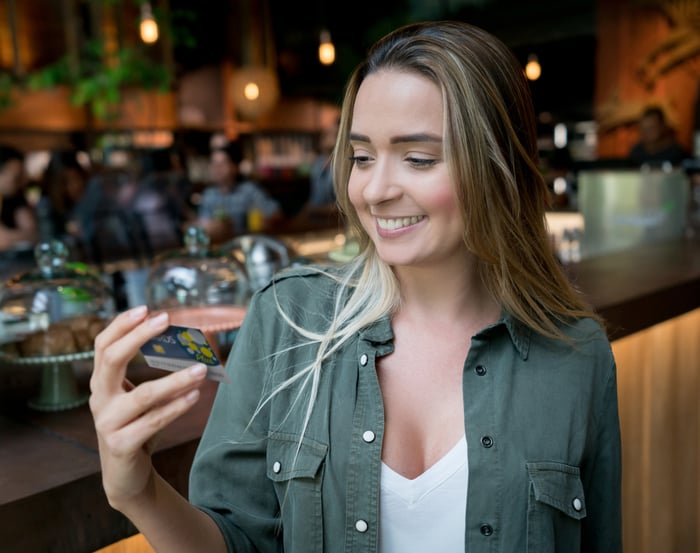 Credit card revenue is up

You know the tagline, "What's in your wallet?" Then you know that Capital One is primarily a credit card issuer, meaning it lends the money to the holders of its credit cards and makes money on the interest paid on the loans, as well as swipe fees from the merchants who make the sale. The company makes about 60% of its revenue from the credit card business. But Capital One is a traditional bank, too, offering consumer and commercial banking services with some 470 branches in nine states, primarily in the Virginia, Washington, D.C., and mid-Atlantic region.

Capital One's earnings had been pretty flat for most of the past decade, and dropped sharply during the pandemic, like most banks, but it has surged over the past year and a half during the economic recovery. In the third quarter, Capital One saw a 6% increase in revenue year over year to $7.8 billion, while net income jumped 29% to $3 billion, or $6.81 per share. Net interest income accounted for most of the revenue, about $6.2 billion, up 11% year over year. The net interest margin was 6.35%, up 67 basis points from the second quarter of 2020.

The revenue gains were due to solid loan growth, as period-end loans held for investment increased 5% to $261.4 billion. Credit card loans jumped 4% to $105 billion, with $99.3 billion of that from domestic cards. This was the result of domestic credit card revenue up 14% year over year as purchase volume climbed 28%.

Furthermore, the domestic card charge-off rate was 1.36%, down 228 basis points from a year ago. Commercial banking loans also rose 7% to $79.2 billion, while consumer banking loans jumped 3% to $77.1 billion and auto loans increased 4% to $74.7 billion.

There are a few factors driving Capital One's growth -- starting with the economy. While rising consumer prices and supply chain issues are a concern, the economy is expected to grow 5.6% in 2021 and 4% in 2022, according to economists at Goldman Sachs. The recently passed $1.2 trillion infrastructure bill and the pending $1.7 trillion Build Back Better bill could spur more economic growth.

Internally, Capital One officials see a couple of factors that further its growth, one being an aggressive marketing campaign. The company saw marketing spending increase 165% year over year in the third quarter, and 21% over the second quarter of 2021 as the company continues to build up its already strong brand. On the third-quarter earnings call, CEO Rich Fairbank said:

We're leaning further into marketing to drive growth and to build our franchise. At the same time, we're keeping a watchful eye on the competitive environment, which is intensifying. Looking ahead, we expect a sequential increase in total company marketing in the fourth quarter that's consistent with typical historical patterns.

Fairbank said he also sees a technology advantage for Capital One, as the company has steadily invested in technology upgrades over the past decade. "Our technology transformation is changing the trajectory of Capital One ... in driving growth, improving efficiency, strengthening risk management, enhancing the brand, and improving our status as the leading destination for great talent," Fairbank explained.

Those investments are starting to pay off as the efficiency ratio dropped to 53.4% in Q3, from 53.8% the previous quarter, and the operating efficiency ratio (operating expense divided by total net revenue) fell to 43.9% from 45.4% in the second quarter. The goal is increased efficiency in the coming quarters and years.

Capital One's stock price is up about 56% year to date, and analysts project a consensus increase of 24% in 2022, largely based on these growth drivers and its low valuation.

Capital One has a price-to-book (P/B) ratio of 1, which means the stock is trading in line with its book value. But a low price-to-earnings (P/E) ratio of just 5.6, and a price-to-earnings-growth (PEG) ratio of 0.45, indicate a stock with more earnings potential than the market is recognizing. This is supported by a high return on equity (ROE) of 20.6%, an operating margin of 51.3%, and a profit margin of 41.2%, which is significantly higher than where it has been over the past decade.

So, it looks like Capital One is in a good position to grow, based on its low valuation and revenue prospects. It might be a stock to consider before Wall Street wakes up and sees its value.