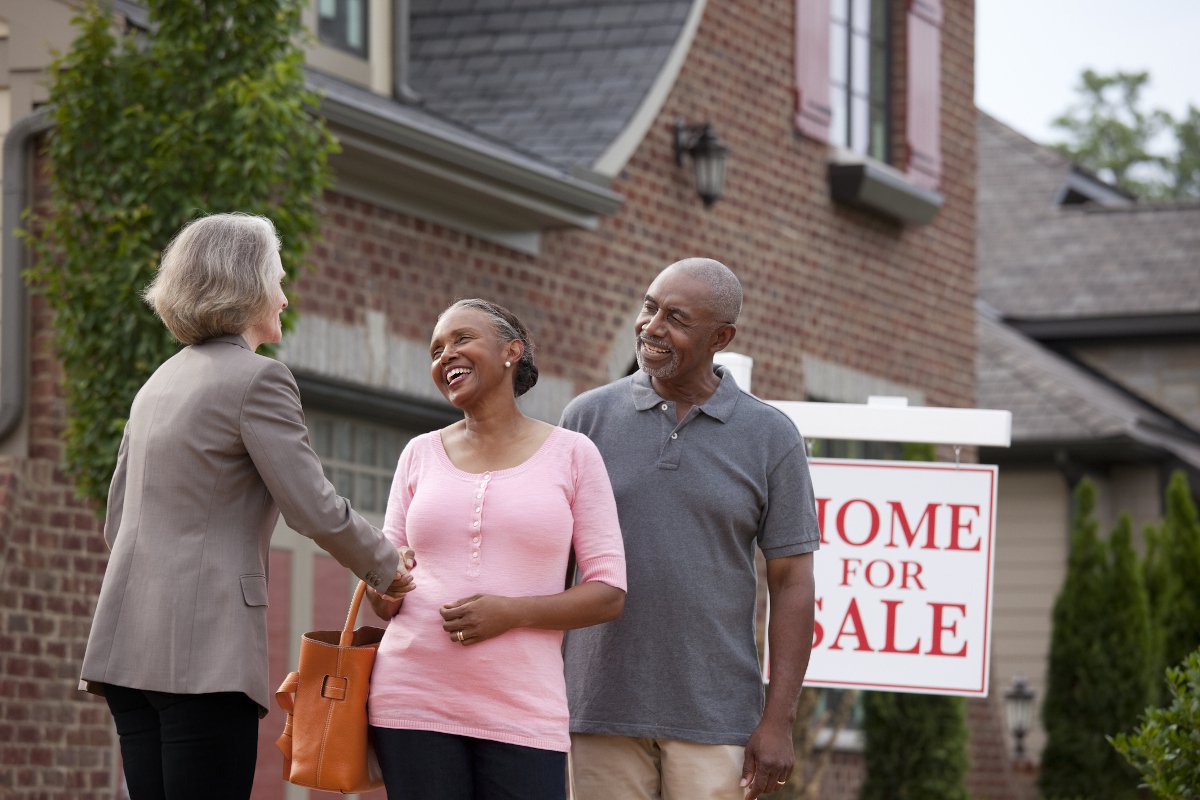 "Blazing," "scorching," "on fire," "red-hot." Those are just a few of the ways the housing market has been described over the last year. And rightfully so -- residential real estate prices are at record highs and have risen at a record pace, housing inventory remains low, and the 30-year fixed mortgage rate is still at an attractive level for homebuyers.

We decided to take a deeper look to get a better picture of how this housing market compares to recent years.

We found that most housing market metrics are at all-time levels, pointing to a seller's market. Houses are selling faster than ever, with more offers and a higher percentage of them being made above the list price.

Read on for a deep dive into just how hot the housing market really is.

89% of residential properties were sold in less than a month in June, compared to 56% in June 2019

That number has been on the rise since the start of 2020 and saw its largest jump between February and March 2021.

That nearly 9 in 10 houses are being bought within a month of being on the market is a clear indication that demand in the housing market is historically high. The fact that that number has stayed relatively stable shows that this isn't just a blip, either. 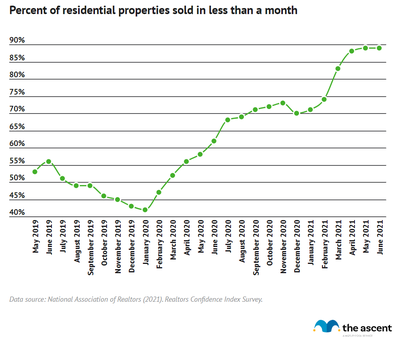 Another indication that the housing market is sweltering is that homes spent, on average, 17 days on the market in June 2021, compared to 27 days in June 2019. 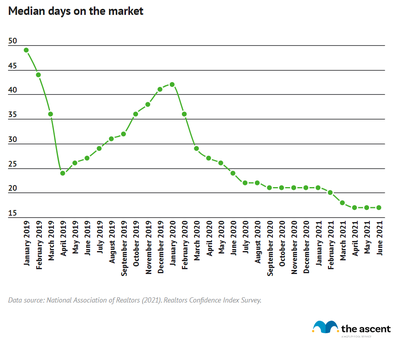 4 offers per home were made in June, roughly double from two years ago

Another sign of unprecedented demand in the housing market is the fact that homes are averaging over four offers before being sold, about double the number received two years ago.

This data again reflects high demand from homebuyers paired with low supply. Given the raft of media stories over the past year about bidding wars, we weren’t surprised by the steady rise in offers per home sold. 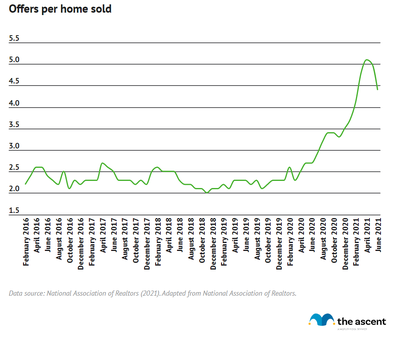 Homes in Utah, Washington, Arizona, Georgia, and New Hampshire received the most offers

Those states likely see lower offers per house sold for a variety of reasons. Population and economic output may be two fundamental reasons -- those eight states rank relatively low in both categories. 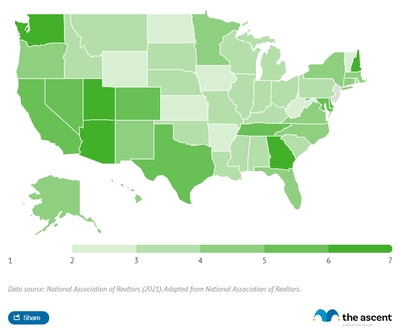 Those contingencies -- which can be included in an offer to buy a home -- allow a buyer to back out of a deal under certain conditions. In essence, they are protections for the homebuyer and lender.

Waiving those contingencies, while generally not advisable, can make an offer more appealing to a seller, especially when multiple similar bids are on the table, because it eliminates hoops for them to jump through before selling the home and leaves fewer outs for the homebuyer.

Houses aren’t just flying off the market with record numbers of bids -- 55% of bids are above list price, according to the National Association of Realtors, and almost half of all homes are selling at above their listing price, per data from Redfin. 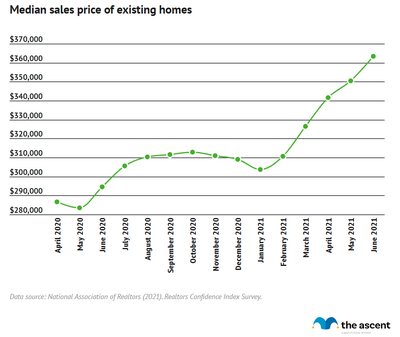 In the first five months of 2021, 22.4% of buyers of existing homes made an all-cash purchase

The rate of all-cash purchases is also up 2.7% from 2019, with 22.4% of homebuyers making their purchase with all cash and no financing in the first five months of 2021.

All-cash purchases are more attractive to sellers. They usually result in faster closing times and carry less risk than offers that are contingent on financing, so it’s no surprise they’re a bit more popular, despite elevated home prices. 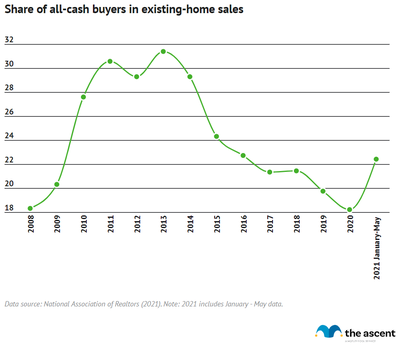 Given that houses are being bought and sold at a record pace for record prices, it shouldn’t be a surprise that new home sales have more than doubled over the past decade, with 769,000 home sales in May 2021 compared to 305,000 in May 2011.

The pace of new home sales picked up considerably starting in May 2020, after a slight dip in March and April, perhaps because families eyed more comfortable lodging as the pandemic reshaped daily life. 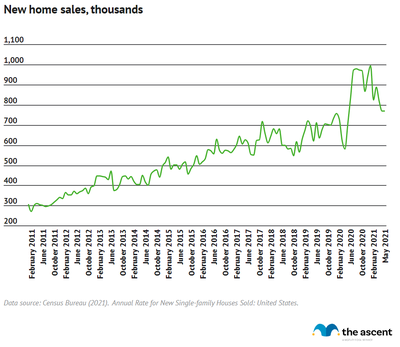 As with sales, a steep drop in construction starts and finishes occurred in April and May 2020 when initial widespread disruptions from the pandemic were first felt in the United States.

Despite record-setting construction rates, housing supply remains depressed, with 2.6 months of supply estimated for June compared to 3.9 months of supply on average in 2019. Supply that low tilts the market towards sellers. A four- or five-month supply generally creates an equal housing market. More supply reduces cost pressure and gives buyers more options to choose from, creating a less cutthroat market. 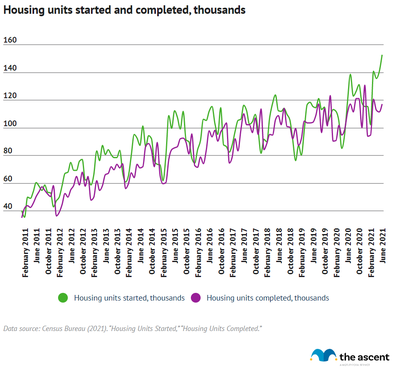 One of the hottest housing markets in recent memory

The housing market is undoubtedly scorching now, and by many metrics has been for about a year.

What do these data points mean if you’re in the market for a house?

The Ascent has tools to help, from the best mortgage lenders chosen by our analysts to calculators, a mortgage pre-approval guide, and tips and advice for first-time homebuyers.

Jack Caporal is an analyst and writer with The Motley Fool research team. He previously followed business and economic trends as a reporter and policy analyst in Washington, D.C.