How Are Americans Dealing With Income Loss During COVID-19? 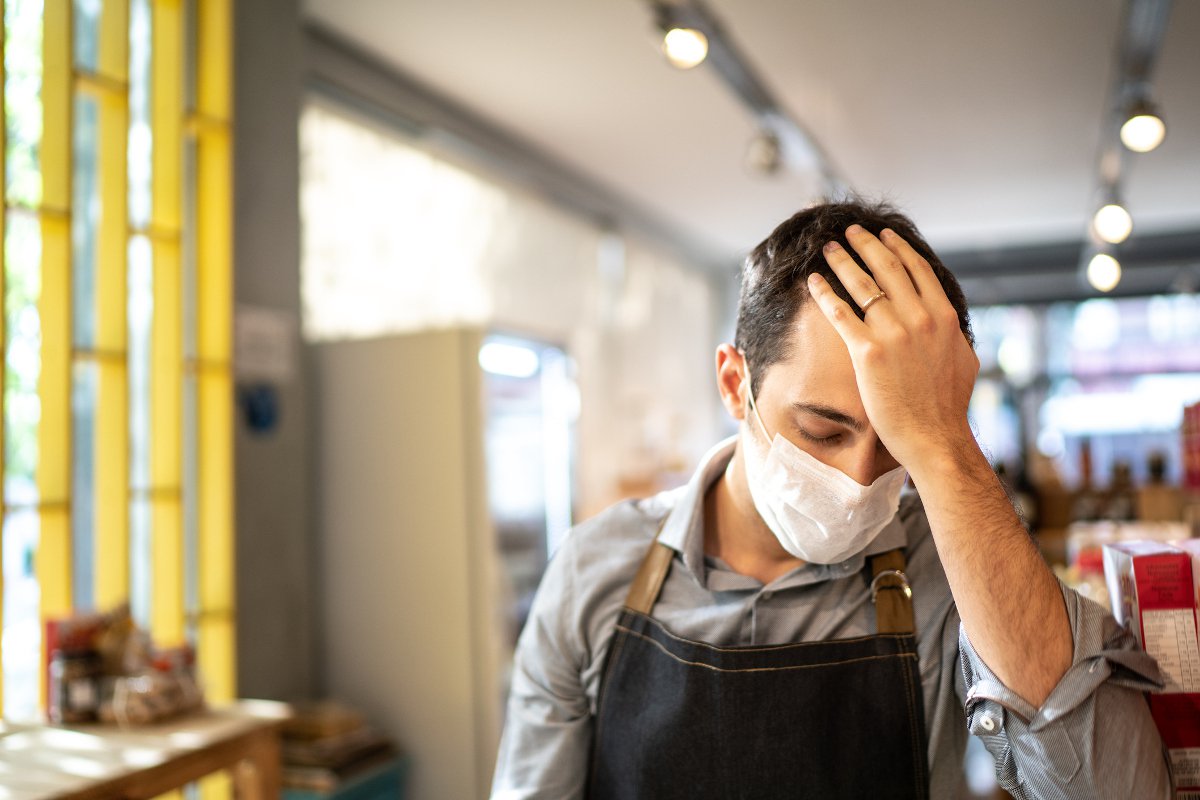 When U.S. COVID-19 cases started multiplying in March and stay-at-home orders were enacted, many people assumed they'd be stuck in the house for a couple of weeks, then resume their normal lives. Little did many of us think that a virtual lockdown would ensue for months and disrupt life in the most extreme manner possible -- and force millions of Americans into unemployment.

In February 2020, the U.S. unemployment rate was 3.5%. In April, it spiked to 14.7%, with May's jobless rate coming in at 13.3%. And while a modest dip in unemployment is encouraging, make no mistake about it: A double-digit jobless rate is unquestionably catastrophic.

Meanwhile, Americans who have lost income during the pandemic are finding different ways to cope. We surveyed 1,997 Americans aged 18 and over who've experienced income loss since early March, and here are some of the choices they've had to make in the course of the past few months.

How much income have working Americans lost?

A reduction in hours hit 41% of Americans who lost income, while 28.3% were laid off from their jobs entirely. Meanwhile, 16.8% were furloughed. Some workers do get paid during a furlough, but many don't.

Some workers lost a modest portion of their income, but for others, that loss was more extreme. Here’s a snapshot of how much income loss people are grappling with:

Here's how that data breaks down by gender:

While both men and women have lost income because of the novel coronavirus pandemic, it's clear that -- at least among our respondents -- women were hit harder.

This is especially evident when looking at people who lost all of their income. 28% of women who lost income fell into this category, while only 20% of men did. 20% is still a huge number. But a gap of eight percentage points is very notable.

Not surprisingly, low earners -- those bringing home less than $15,000 a year -- were the most likely to lose their entire salaries. By contrast, among workers earning an annual salary of $200,000 or more, only 11.54% lost all of their income.

Here's how the numbers break down:

Furthermore, under the CARES Act, passed in March to provide financial relief during the COVID-19 crisis, workers on unemployment are entitled to a $600 weekly boost in benefits through July 31, on top of the benefit they'd otherwise qualify for. This means that some low to moderate earners may be making more money on unemployment than they did before they lost their jobs.

Here’s what income loss among hourly workers has looked like:

Data source: The Ascent survey of 1,997 Americans who have experienced income loss due to the COVID-19 pandemic, June 5, 2020. Note: respondents were told to use their average hourly wage if they had more than one hourly job.

All told, more than one in four Americans who have lost income have experienced a complete loss of income during the pandemic so far.

How are Americans coping with income loss?

Those whose income has taken a hit are compensating in different ways, with 64.9% cutting back on expenses to make up for lost wages. While certain bills, like food and medication, may not leave workers with much wiggle room, the one positive thing about the COVID-19 crisis (if we consider "positive" relatively) is that it's effectively forcing us to be more frugal. With restaurants still closed in many states (at least for indoor dining) and large-scale events like concerts and professional sports postponed indefinitely, there's less temptation to spend money on leisure.

But for those expenses that can't be cut, like rent and utilities, 20.6% of those who have lost income are asking for relief, like deferred payments or loosened payment terms. And despite the economy being largely shut down, 24.7% of those who have suffered income loss have managed to get a side job to help close the gap.

Thankfully, some Americans have also had money in the bank to tap during the crisis, and 19.9% of those who have lost income were able to make a withdrawal from a savings account. Meanwhile, 14.4% have withdrawn from a retirement plan like an IRA or 401(k) -- a move that's risky in its own right, since it means potentially retiring with less, but one that's reasonable during a period of desperation like this.

Thankfully, the CARES Act allows for penalty-free retirement plan withdrawals for those who have been impacted financially by COVID-19. Usually, distributions taken prior to age 59 1/2 are subject to a 10% early withdrawal penalty.

How much are Americans borrowing?

In addition to the above measures, 26.2% of those who have suffered income loss have taken out a loan to make ends meet. Specifically:

Unfortunately, Americans are having to borrow a lot to stay afloat:

Meanwhile, here’s how much income those loans are replacing:

As you can see, most people who have already had to borrow during the crisis replaced less than 50% of their income. On the one hand, that’s a good thing -- it could mean they didn’t have that much lost income to make up for. On the other hand, it could be that some people struggled to borrow the full amount they needed.

How much is unemployment helping?

Among those who lost income during COVID-19, 47.5% have filed for unemployment. It's unclear why the other 52.5% didn't file. In some cases, it could be due to a lack of eligibility, but since the requirements to claim unemployment benefits were relaxed by the CARES Act, that would be surprising. Case in point: Gig workers, historically excluded from unemployment, are now able to file.

It could be that those who haven't yet filed for unemployment benefits were laid off more recently and plan to do so; they may also be unaware that they're eligible under the new rules. Technical glitches may also be to blame. With so many Americans filing for unemployment at once, reports have circulated about states' (often outdated) systems crashing since the start of the pandemic.

Meanwhile, the $600 weekly unemployment boost the CARES Act offers is set to expire on July 31. Democratic lawmakers are pushing to extend it (it’s part of the HEROES Act, still up for a Senate vote as of this writing), and Republicans are pushing back. But that extra $600 a week may be a lifeline for out-of-work Americans.

And, as fits the pattern we've seen so far, women will be hit harder by the expiration of those benefits:

This breakdown is also very instructive when you add race into the mix:

Hispanic women, for example, are in a very precarious position, with 50% of our female Hispanic respondents saying that they couldn't last a month without the extra $600.

What steps will Americans be taking in the next three months to cope with income loss?

Some Americans with income loss have taken steps to help make up for it. Others may have held off on action in the hopes of seeing their financial pictures improve. But over the next three months, those with income loss are likely or very likely to do the following things:

Some of these moves could have long-term consequences -- particularly, taking a retirement plan withdrawal, or even borrowing via a personal or home equity loan. If those loans aren't paid back on schedule, they could cause severe credit score damage.

Interestingly, the things that people think they'll be doing differ by gender. Here's the percentage of each gender who said they were either "likely" or "very likely" to take these actions in the next three months:

How long can Americans stay afloat given their current financial circumstances?

Based on their current financial picture, most Americans who have lost income can't last through the end of the year without an additional source of income. Only 40.2% think they can get by for six months or more.

Meanwhile, 13.1% say they can't even last another month on their present income, while 24.6% say that can only last one to three months. And 22.1% of Americans who have experienced income loss fall somewhere in the middle -- they can last three to six months before resorting to other measures.

Interestingly, 8.9% of those with income loss claim they can get by "indefinitely" with the level of income they're privy to now. That does suggest that lifestyle modification may be the ticket to surviving not just this crisis, but future periods of financial uncertainty.

What does recovery look like for those who have lost income?

Some people with income loss may be able to recover from their present situation pretty quickly. But roughly half of Americans feel the pandemic will produce long-term financial repercussions.

While 21.6% of Americans who experienced income loss think they'll get back to their pre-pandemic financial state within three months and 28.2% think they'll be back there within six months, 46.9% think it'll take more than half a year to recover. A small but notable percentage -- 3.3% -- think they'll never recover at all.

And although slightly fewer men than women think they'll never recover, they're generally more confident in their ability to recover quickly:

Unfortunately, a large number of Americans are having financial difficulties during the COVID-19 crisis, and until cases go down and stay down on a national level, those struggles may continue. The good news is that as more and more states ease restrictions and open back up, we may see a fair number of jobs come back. On the other hand, a second wave of the pandemic could send us right back to where we started. Let’s hope, for so many reasons, that that isn’t the case.

The Ascent distributed this survey via Pollfish to 1,997 American adults ages 18 and over who have experienced income loss because of COVID-19 on June 5th, 2020. While efforts were made to create a representative sample, there is variability in any sampling method, and no strict statistical testing was performed.

Some percentages may not total to 100% due to rounding.

The Homeowners Insurance Discounts That Save You the Most, Ranked

Average Cost of a Mortgage Refinance: $3,398

The Homeowners Insurance Discounts That Save You the Most, Ranked

Average Cost of a Mortgage Refinance: $3,398